It's over, she says, and you believe it. You nod and agree, Yes, it's over, best we go our separate ways. But then of course there's the party and it would be too awkward to back out and you've had a drink, or several, and the balloons have sunk to the floor and the two of you are dancing and your head is on her shoulder and maybe maybe you can stay over just for tonight except when she's undressing you have to open your mouth and you don't even remember what you said but in a hot second she's crying and pushing you out the door, she doesn't even care she's half-naked.

The next morning you text her an apology. It's over, you say. Yes, she texts, it's over. But neither of you believe it.

Join Portuguese Artists Colony and their undead hearts on Sunday, November 3 at the Make-Out Room.

Guest readers:
Camille T. Dungy is the author of Smith Blue, Suck on the Marrow, and What to Eat, What to Drink, What to Leave for Poison. Her honors include an American Book Award, two Northern California Book Awards, and a fellowship from the NEA.

Joe Loya is author of the memoir, The Man Who Outgrew His Prison Cell: Confessions of a Bank Robber. His TV commentary ranges from crime to politics and religion. That's why his prison zombie apocalypse ebook, The Red Mile, was no real literary stretch.

Sylvie Simmons, or as Leonard Cohen calls her, "darling", is a British, ukulele-playing, award-winning writer of fiction and non-fiction, Cohen's biographer and the subject of BBC documentary The Rock Chick. 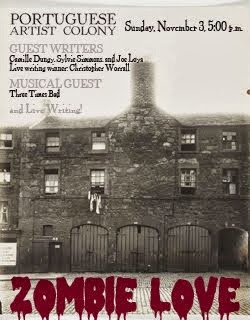