It's your first date, she's wearing a dress and you shaved just before going out the door. She finds your jokes funny, and you aren't thinking about the moment when she won't anymore, when she'll give you that weary face instead of tonight's full-out laugh. You order a bottle of wine, and you don't know that soon you'll notice the hairs that sprout from her enchanting mole, you wouldn't believe it if your future self came back in time to tell you that the pitch her voice gets when she asks, again, if you've taken out the garbage will make you want to cover her face with your hands.

Kim Addonizio’s verse novel, Jimmy & Rita, was reissued by Stephen F. Austin State University Press. Her other recent books are Lucifer at the Starlite and Ordinary Genius: A Guide for the Poet Within, both from W.W. Norton. She teaches poetry workshops in Oakland, CA and online at www.kimaddonizio.com.

Glen David Gold is the author of the novels Sunnyside and Carter Beats the Devil. He has written essays, memoir and fiction for the New York Times Sunday Magazine, McSweeney's, Playboy and Tin House, and comic books for DC and Dark Horse. His episode of Hey Arnold is streaming on Netflix.

Katie Wheeler-Dubin and Joe Loya tied to win in December's live writing. In a brilliant move, they have collaborated on a finished piece! 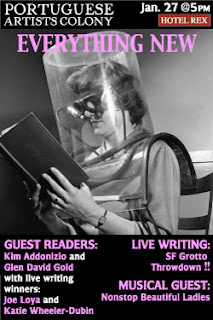 This month it's an epic showdown, featuring all writers from The San Francisco Writers' Grotto!