An ordinary-sized healing just won’t do, not for you. Your sickness goes way too deep. Your pathology is mountain biking down a snow-covered peak in the Rockies; your sin is bungee jumping off a bridge in New York; your depravity is shredding a broken asphalt path in a park for senior citizens.

You are in need of Xtreme! Unction, and Portuguese Artists Colony has a jumbo vat of consecrated oil with your name on it.

Special guest readers:
Robin Ekiss is the author of The Mansion of Happiness, winner of the 2010 Shenandoah/Glasgow Prize and a finalist for both the 2010 Northern California and California Book Awards.She lives in San Francisco with her husband, also a poet, their son, and their cats, Alice B. Toklas and Gertrude Stein. 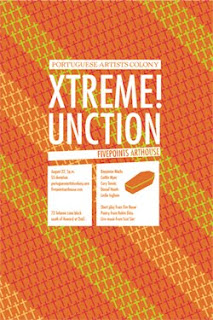 Receive your blessing on Sunday, August 22nd, at 5:00 pm at Fivepoints Arthouse.

Doors open at 4:30. Come early to get a seat, have a drink, settle into your Sunday afternoon.