The blue ice in the cooler isn't cold anymore and you can smell sandwiches, the kids will not settle down for one minute, Leticia keeps kicking the back of your seat, and you're not even out of Nebraska yet. You watch those rich families cruising by with glowing screens in the backs of the seats and you think, It's never going to end. Someday, sure, the kids will grow up and maybe maybe they'll get out on their own, but who's kidding who about retirement, nobody gives out gold watches and a bucket of money to last until you die, that was your dad's generation, you'll get too old for your job and keel over behind the counter of a Del Taco, that dumb paper hat still hugging your sad old head.

It's just you and the kids since their father walked out so why spend another vacation with family? Take the next exit and see where it goes, remember that feeling when you were in college, a full tank of gas and cash in your pocket, anything could happen.

Join Portuguese Artists Colony on Sunday, March 24th, to see where the road takes you.

Featuring guest readers:
Patricia Ann McNair’s short story collection, The Temple of Air, was awarded Book of the Year by the Chicago Writers Association, Southern Illinois University’s Devil’s Kitchen Reading Award, and a finalist award by the Society of Midland Authors. She is an associate professor of Fiction Writing at Columbia College Chicago.

Siamak Vossoughi was born in Tehran, Iran and lived in London, Orange County, and Seattle growing up. He moved to San Francisco eighteen years ago, in part because he loved William Saroyan. He writes short stories, and some of his work has appeared in Fourteen Hills, Prick of the Spindle, the Massachusetts Review, and forthcoming in Glimmer Train. 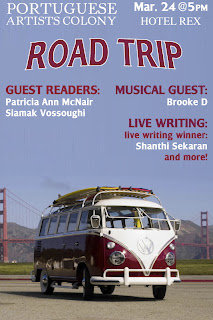