You go to the restroom in the back of the cafe, pushing in the little thumb lock on the handle, feeling it click. You're on the toilet, all the coffee you've been drinking during your meeting doing its work, and the handle moves, the door is opening, and now you see large letters over the bolt that say USE THIS LOCK and you're lunging for the door and someone is coming in, your pants around your knees, you're standing naked and it's worse than you thought, the person covering his/her face and turning away is your co-worker, the person you have to pass on your way to your desk every day, every day you re-live this moment, you are forever the person with your pants around your knees, you are a full, pulsing embodiment of humiliation.

Let Portuguese Artists Colony take the edge off, or sharpen that edge until it shines with fever and glory. Your blush glows and is beautiful to see.

Featuring guest readers:
Alia Volz is a San Francisco daughter, perpetually abandoning this city and circling back. She favors southern latitudes, and one irrational socialist isle in particular. Her writings and translations have recently popped up on Nerve.com and numerous literary journals, such as ZYZZYVA and Instant City. She has been teased with a Pushcart Prize nomination, among other close-calls. Stalk her at aliavolz.com

Andrew Dugas's fiction and poetry have most recently appeared in
Instant City, Flatmancrooked, SoMa Literary Review, and elsewhere. A
regular reader at local literary events, he's currently shopping
around SLEEPWALKING IN PARADISE - A San Francisco Novel about Old
Money, the New Economy, and the Second Coming.


Andrew's piece written during November's live writing was chosen to be developed for this month's show. Don't miss the result!

Plus! Readings from Colonists Benjamin Wachs and Cary Tennis

Live writing is back! 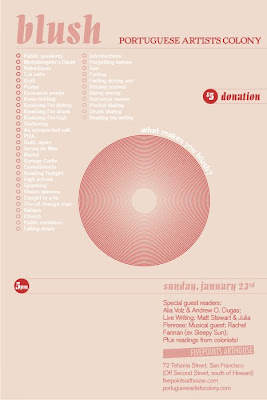