You can't help yourself. You're attracted to drama: the tear-streaked trailer owner whose home was tossed across the road, the man slowly emerging from the collapsed building, those live interviews on TV, Area Woman wide-eyed and nearly incoherent.

You can't help it. Your heart jumps when the lights in your office building flicker out, you can't even feel shame in the hope that it's an attack, a bomb, a fire, something something to pull you into a larger story. The temptation grows, every day, to give the world a little nudge, an announcement that you're here.

Sift through the wreckage with Portuguese Artists Colony on Sunday, July 7.

Elizabeth Bernstein‘s fiction has appeared in the Los Angeles Times Sunday Magazine, the SF Bay Guardian, Tin House online, and other journals. She's the founding editor of the literary magazine The Big Ugly Review. She's a freelance book and story editor, and she teaches short story workshops at the San Francisco Writers' Grotto.

Seth Fischer’s writing is in Best Sex Writing 2013, PANK, The Rumpus, Buzzfeed, Guernica, and elsewhere, and he has a notable essay in The Best American Essays 2013. He’s at work on a memoir called The Three Year Switch. He teaches at Antioch University LA and Writing Workshops LA.

Maw Shein Win’s poetry and prose has appeared in many journals. She was co-founder of Comet and is currently a co-publisher for Stretcher. Her latest poetry book, Ruins of a glittering palace, with paintings by Mark Dutcher, was recently published by SPA. She is a freelancer at the SF Writers' Grotto.

Great tunes from Heather Yager, of Ladies in Blouses. 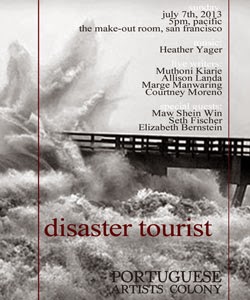