om·pha·lo·skep·sis (noun): the contemplation of one's navel as an aid to meditation.

Join Portuguese Artists Colony on a journey to the center of your self and all the monsters who reside in the alien landscape of your bellybutton.

Special guest reader:
Peg Alford Pursell's fiction received the (S.C.) State Fiction Award and was a short-list finalist for the Flannery O’Connor Short Fiction Award. Stories have recently appeared or are forthcoming in Staccato Fiction, Emprise Review, Precipitate Journal, The Fabulist, Pure Francis, Burrow Press, and The Big Ugly Review. She teaches at the College of Marin and Book Passage, and in private workshops, and curates the Why There Are Words Literary Reading Series in Sausalito.

Live music from The Alegre Sisters.

Introducing a new feature: Live writing
Ever wondered how writers write? Now you can see it as it happens. Vote on a prompt as you enter the show, and four writers will write on the winning topic while you watch them sweat, swear, and get inspired. Each writer will read what s/he wrote, and you get to vote on which piece you'd like to see developed into a finished story/poem/rant to be read at the next PAC performance. 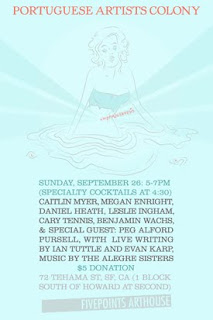 Drinking starts at 4:30, with specialty cocktails mixed by Daniel Heath!

PAC is getting noticed, and in a good way. Read the latest review from Charles Kruger and just try to stay away:

We're cooking up something new and kind of kinky for our reading on September 26: Live writing. Stay tuned to learn more about it.
Posted by Chemical Billy at 2:58:00 PM